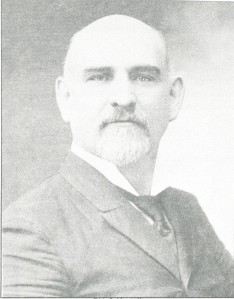 THE MOSES OF LANDMARKISM. Elder J. N. Hall, editor of The Baptist Flag & veteran of 97 public debates, was eulogized with this title by an editor of another religious group shortly after his death, Dec. 4, 1905. And like the great leader of old, he was allowed to view the Promised Land from on high, but not to actually enter its boundaries.
A STEAM LOCOMOTIVE lurched to a stop at the old depot in Prescott, AR, early the last Sunday morning in Nov., 1905. The mud streets & board sidewalks were almost deserted when the conductor helped a shivering & gravely ill but determined preacher down the steps. He was there to meet a preaching appointment at the Baptist Church located just yards from the tracks in spite of the pleading of his associates to cancel the night before. ON SATURDAY Bro. Hall, already ill, worked all day as chairman of a committee to draw up the Statement of Principles of the new association. Thus, he was a leading author of the first constitution of a national association of Landmark Baptists. THAT EVENING, at the meeting house of the First Baptist Church in Texarkana, TX, Bro. Hall addressed the messengers of the historic convocation. Though burning with fever, he electrified the congregation with a powerful message on why he believed the Bible was inspired, a prophetically appropriate topic for this first association of fiercely independent churches that became the American Baptist Association in 1924. (From The Vine Line, HLW, September 1989)